Presenting sketches of this winter's art at Icehotel 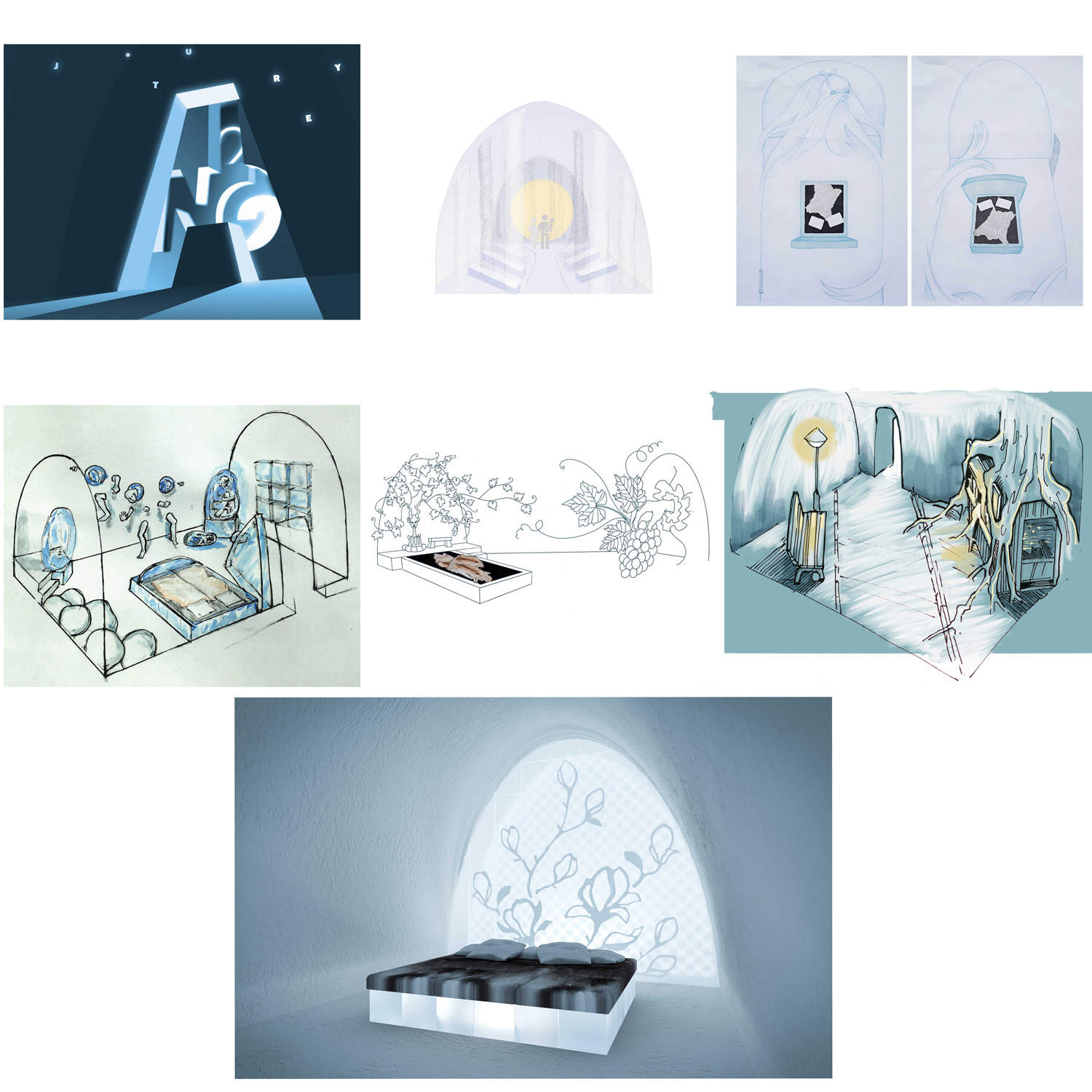 Summer is reaching its peak, while inside Icehotel in northern Sweden the temperature is always below zero. We are now presenting the art that will be featured in the 31st consecutive Icehotel Winter, opening on 11 December 2020.

1,300 blocks of crystal-clear ice, harvested from the Torne River this spring, are now waiting to be transformed into art suites at Icehotel in Jukkasjärvi. An all-new hotel of ice and snow will be created by an art team, art support, building crew and lighting team. At this year's version of Icehotel guests can look forward to entering an art suite filled with typographic art, where the spaces between the letters reveal their secrets. Visitors can also reminisce in a forgotten hotdog stand made of ice and snow. In one of the art suites we meet women who, in one way or another, escape from bubbles of ice, while another art suite has been inspired by the Swedish national scald Carl Michael Bellman's most renowned epistle, “Rest by this spring”. Here, visitors themselves are the ones who rest by the frozen spring, surrounded by grapes, song and other good things in life.

This year's artists, all residents of Sweden, have been selected by the art team at Icehotel Artists, Icehotel #31:

Each year Icehotel is visited by some 70,000 guests from throughout the world, about 50 couples get married amid snow and ice, and many guests have enjoyed the famous ice menu in Icehotel Restaurant – a five-course menu served on plates made of ice, straight from the Torne River. In addition to the seasonally open section, since December 2016, the hotel has featured the 18-room snow-and-ice “Experience Room” and Icebar by Icehotel Jukkasjärvi. Icehotel 365 is open all year round in Jukkasjärvi. December 11th is the official opening of this year’s art suites in Icehotel Winter.

Icehotel in Jukkasjärvi opened in 1989. In addition to being a hotel it is also an art exhibition, with original art in ice and snow, that changes from season to season. Each winter a new version of Icehotel is created entirely from ice from the Torne River, one of Sweden's National Heritage Rivers, which are protected from hydroelectric development. When the winter season’s hotel of ice and snow has melted and returned to the river in spring, part of the hotel remains – a place where visitors can enjoy experiences of ice and snow all year round.

10 seconds – The total amount of ice used to create the winter part of the hotel, corresponding to the volume of water that flows past in the Torne River every ten seconds.

110 million ice pops – The main building material is "snice" (a mixture of snow and ice).

30,000 cubic metres of the material, the equivalent of 110 million ice pops, is used to build the floors, roofs and walls of the hotel.

Icehotel most googled – In 2016 Icehotel was the Swedish tourism destination that was googled most by people outside Sweden.

For more information and interviews