Ice and heat – two contrasts meet when Riksbyggen’s world-famous sauna Solar Egg by Bigert & Bergström arrives at the global tourist destination Icehotel in Jukkasjärvi. With its inauguration on Monday 2 March 2020, both parties want to put a focus on global warming.

From March to May 2020 visitors to the world-unique Icehotel in Jukkasjärvi will be able to have a sauna in the award-winning Solar Egg created by the artist duo Bigert & Bergström for Riksbyggen. The collaboration focuses on climate change and humans’ role in the world’s rising temperature and its effect in the Arctic.

We are focusing more and more of our artistry on the climate issue, and it is extremely important to point out how quickly the glaciers in the Arctic are melting, not least in Kebnekaise

Since the artwork and sauna were first constructed in Kiruna in Spring 2017, to celebrate the beginning Riksbyggen’s construction of 250 homes in Malmfälten, Solar Egg has become a worldwide phenomenon. Solar Egg has visited Paris, USA and Copenhagen. In Sweden, the egg has been shown at Artipelag in Stockholm and Björkliden in Lapland, Gällivare, Kiruna and Rättvik in Dalarna.

We are happy to lend Solar Egg to scenic locations or exciting urban environments that are then reflected in the egg’s facade and create conversations that drive sustainable development. We want to contribute to the new Kiruna, both by building new housing but also by putting Kiruna on the map within the tourism industry.

Visitors will be able to book their own sauna experience in Solar Egg via the Icehotel’s website, www.icehotel.com. Changing facilities, other services and an option for visitors to rent a towel will be provided for by the hotel, according to Luca Roncoroni, Creative Director at the Icehotel.

This winter, Icehotel celebrates its 30th birthday, and it feels especially important to welcome Solar Egg here. The climate issue is a focal point of our daily work and vital for our existence – Icehotel is constructed from crystal clear ice from the Torne River, a material that melts down into the river again

Solar Egg will be inaugurated on Monday, March 2, 2020, at Icehotel in Jukkasjärvi, by among others, Johanna Frelin, CEO Riksbyggen.

The Solar Egg will stay at Icehotel in Spring, March - May, 2020

Due to the Covid-19 the Sauna is closed. 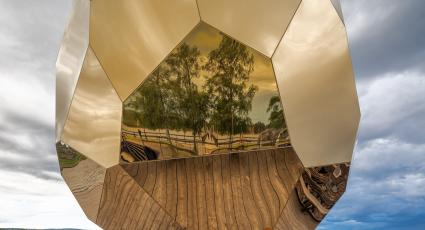 Read the latest press releases from Icehotel in our Press Room. 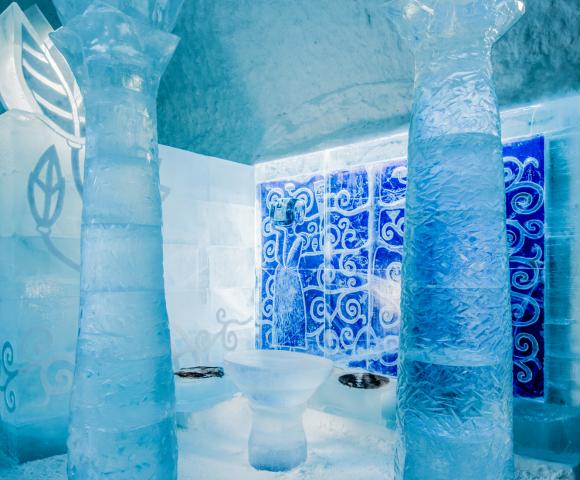 Internationally recognized artist-duo Mats Bigert and Lars Bergström has had a variety of major exhibitions in Europe, China and the USA. Solar Egg, which is 5x4 meters high, has a shell of gold-plated stainless steel that reflects the city and surrounding nature. The self-supporting shell consists of 69 gold plates that are removable, making the construction mobile. Inside, the egg is heated by a wood-fired burner in the shape of a heart.  Solar Egg was designed for Riksbyggen by Bigert & Bergström to symbolise a new start in connection with Kiruna’s transformation. In 2017, Riksbyggen signed a cooperation agreement with LKAB to create 250 new homes in Malmfälten. In 2018, Riksbyggen broke ground on the first apartment building Brf Fjällvyn in Kiruna, which is the first project to be implemented within the agreement. Brf Midnight Sun is project number two with the first residents moving in October 2020.

Solar Egg for Riksbyggen has received several awards, including the prestigious Red Dot Award, the Steel Business Award in 2017 and the German Design Award and the Swedish Arts & Business Awards. Solar Egg has also been awarded silver in the Swedish Design Awards and bronze in the London International Awards. Over a billion people have been able to read about the sauna on both traditional and social media. A book about the Solar Egg was published in 2019 by the publisher Art&Theory.

Each spring, the hotel brings fresh ice for next year’s hotel rooms and lets designers and artists from around the world design the interiors with ice. Bigert & Bergström’s sauna Solar Egg will be standing on the banks of the river next to the hotel. Since the small art gallery, which was the forerunner and inspiration for the Icehotel, was built in 1989, it has been reborn in new vintage every winter for thirty years, in the village of Jukkasjärvi 200 km North of the Arctic Circle. It was the start of this journey that introduced the world to the Torne River, and Torne River to the world. A permanent facility was opened in 2016, offering visitors a chance to sleep surrounded by snow and ice art all year round – with the help of solar energy.