Share your love with family and friends in an unusual wedding in Jukkasjärvi. The unique location, the ice, the snow, and the ethereal surroundings make Icehotel quite possibly one of the best places imaginable for a winter wedding. With an in-house wedding coordinator, we will help you plan the wedding of your dreams.

Lapland is a truly spectacular wedding destination for those searching for an alternative that offers intimate, unique location and stunning landscape for an outdoor ceremony, reception or wedding photography.

Our Ice Ceremony Hall returns to the river in spring, but love is eternal. Reborn in a new guise each winter and hand carved by carefully select designers, it is ephemeral and one of the most unique wedding locations that you can find.

'The ephemeral element adds to the sensation – when no architectural memento exists, the memories and the vows exchanged are especially cherished.' 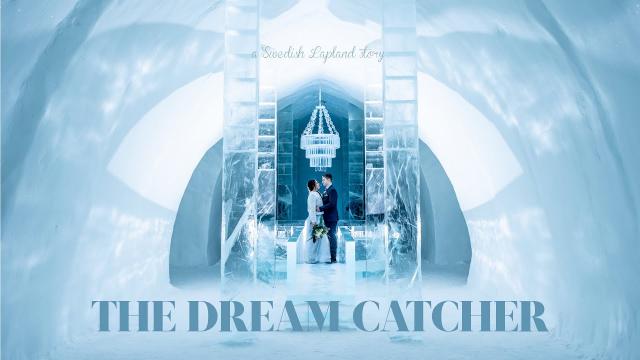 Quick facts about the Ceremony Hall at Icehotel

Outdoor wedding inspiration for all seasons

Nestled on the bank of a quiet stretch of the Torne River, enveloped by depths of pine trees reaching for the sky, Jukkasjärvi offers so many inspiring, romantic venues for an outdoor wedding ceremony. Hotel accommodation for you and your guests, amenities and a reception venue for the party is nearby as Icehotel is located in the heart of the village.

Getting married at Icehotel

Around 80 ceremonies are held at Icehotel every year, most of which are winter weddings taking place between December and April. The events range from elopements to bridal parties of up to 50 guests. Whereas many of our couples prefer our hand-picked wedding packages, we also offer the possibility to tailor the wedding to your wishes. No matter which option you choose, you will be in the safe hands of a personal wedding coordinator who has the local knowledge and vendor partners to guide you through all the important decisions for your big day.

Snowmobile suits or traditional wedding attire, you decide! A general advice is to think warm and wear layers. All guests who stay at Icehotel get complimentary outer clothing on loan that we recommend your guests to wear during the ceremony.

What about make-up and hair?

You have the option to book a warm room to prepare hair and make-up, getting dressed and store cold sensitive belongings like camera equipment and the bridal bouquet. You can also use the heated service building, Dressing Room, adjacent to Icehotel, which is open and staffed 24 hours during winter.

When to get married - Lapland seasons

Icehotel is located 200 km within the Arctic Circle and in the heart of Swedish Lapland. Our seasonal shifts are dramatic, and in fact, the indigenous Sami people divide the year into eight seasons. Winter lasts from November until early May, overlapped by the Northern Lights season which runs September - April. During the harshest winter months, temperatures in the -20 to -30 C are not unusual, while April has flown under the radar as a strong contender for late winter trips with long, sunny and mild days ideal for skiing and snowmobile excursions with outdoor lunch.

The Arctic summer and fall landscapes are equally spectacular. June, July and August with its bright nights and mild summer temperatures will keep you dancing until morning and vouch for avoiding heat rashes and sweat stains on your guests’ party outfits. At 200 km above the Arctic Circle, the romantic glow from the Midnight Sun ensures 24-hour daylight between May and early August. Nature and wildlife are at their most active, offering a playground for you and your guests to go for wilderness adventures like whitewater rafting or hiking in one of the nearby nature reserves.

Come late August and September, the landscape is transformed into a cascade of red and orange, and as the nights get darker, the northern lights start making their reappearance.

Contact us to start planning your romantic adventure today.

How long to stay for

If you are planning a destination wedding to Icehotel or elsewhere in the Arctic Circle, we recommend you plan for you and your guests to stay 2-3 nights minimum. Allowing an extra day at the destination before The Big Day gives some room to recover from jet lag and potential flight delays that are not uncommon for international guests traveling to Lapland.

This day is an ideal time for you to plan some activities for the group to get to know each other and offering your family and friends the chance to experience what the destination has to offer. Most our guests choose to depart with the mid-day flight, allowing some time in the morning for a healthy breakfast and perhaps a short walk in the fresh air to recover from the party before it’s time to head for the airport.

Important note; when getting married in Sweden you are required to have a written consent from the local authorities. Your Icehotel wedding coordinator handles all the administrative work and books your appointment, but you’ll need to schedule a few hours for this before the ceremony can take place.

Fun wedding activity and favor ideas for your guests

Planning a joint activity helps breaking the ice and gives you a chance to hang out with everyone - a great way to start off the wedding. Or, surprise your guests with a memorable gift from the destination to bring home with them. Here are some ideas real Icehotel wedding couples have done in the past:

International couples getting married in Sweden are legally required to get a written approval by the local authorities in order to be wed by a religious or civil officiant. Your wedding coordinator handles the correspondence with the Swedish authorities for you, but you will need to provide Icehotel with a “Certificate of No Impediment to Marriage” from your local registry office and copies of native passports and birth certificates 12-14 weeks before the wedding date in order for us to start the process of getting your permit ready in time.

We will help you to arrange an appointment for a mandatory physical meeting with the local registrar in Kiruna to formally apply for the marriage certificate which is required by Swedish Law. This can be done at latest in the morning of the wedding day. For this appointment they are obliged to bring all original documents to show to the registrar.

Do you offer civil marriage ceremonies?

Yes, we offer civil weddings in the Ice Ceremony Hall, in the majestic Main Hall or other places in and around the hotel. We assist you with a wedding officiant for civil ceremonies.

What about same-sex marriages?

Same-sex marriage in Sweden has been legal since 2009, following the adoption of a new, gender-neutral law on marriage. Sweden was the seventh country in the world to open marriage to same sex couples. Icehotel welcomes all couples who wish to get married in our Church or at any Icehotel venue.

If you ask us, there is no better way to start of your new journey as a married couple than with a romantic adventure. The Arctic is one of the best places in the world for active people looking for a romantic and alternative honeymoon vacation, or destination to pop the question.

Best experiences and ideas for honeymoon and proposal trips 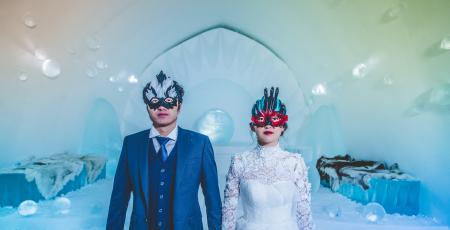 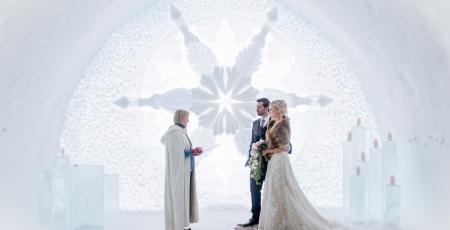 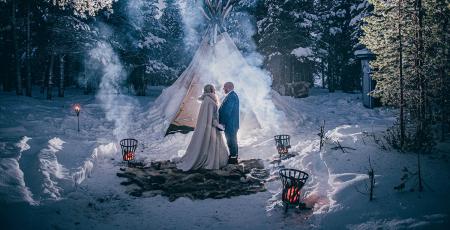